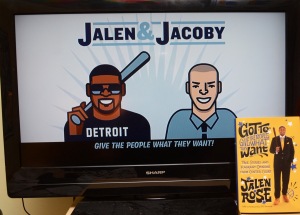 Jalen Rose has found success.  He was a star basketball player that helped shift the college game followed by a lengthy NBA career.  Since his retirement from the NBA, Jalen Rose has had an exceptional career in broadcast journalism, most recently with ESPN.  His relationship with Bill Simmons grew from the ESPN job to become an integral part of Grantland.com.  Rose believes that what people crave are honest insights and information they can’t find elsewhere.  With this book, Jalen Rose stays true to himself, striving once again to give the people what they want.

The biographic background of his story is not the focal point of this memoir.  While it isn’t too detail oriented, he does include gems like the time that Derek Jeter chose to focus on baseball after losing to Rose’s high school basketball team.  There is a lot of focus on his father, former NBA player Jimmie Walker and the impacts that Walker’s actions had on Jalen, one of many sons with as many different women around the country.  The handwritten portions of the book feel even more personal than the already first-person memoir, and draw the reader in. These types of serious reflections about Rose’s life keep the book from being as funny as some fans may have come to expect.

Got to Give the People What they Want may lack some of Rose’s standard humor but it is not lacking any of his, to use his words, flagrant opinions.  Rose recognizes the opportunity ahead of him; the book is a chance to give his opinions on situations, persons and events unrestricted without interruption.  This fact is not lost as he gives the lowdown, both good and bad, on former coaches Larry Brown, Larry Bird and Steve Fischer, Mitch Albom – author of Fab Five, his early mentors Perry Watson, Ed Martin and many more polarizing figures of his past.  Insider perspective into older news stories is appreciated but the strength of this book lies in the bigger issues.  Rose gives a realistic perspective on the life of an NBA player and how goals get adjusted within the business.  He feels very strongly about the social responsibilities that athletes carry, especially when race is at play. The book is filled with broader ideas that the reader can fine tune on their own time in addition to specific suggestions such as how to help ease the tension between the NCAA, their boosters and the players. This quick read is time well spent for those interested in sports, journalism, race relations and autobiographical books.

I received a copy of this book from The Crown Publishing Group for review purposes.